I have done no ‘active teaching’ in Helena’s learning to read. I was trying the theory that you can learn to read yourself as I was never convinced that the rituals at school teaching kids to read were what was doing it. It’s all the child. The ingredients for reading are: a child who wants learn to read, loves stories, or maybe likes making stuff, food, anything you can learn about that can be delivered in a book, a child who is READY in some hard to pin down way. There are obvious signs of pre-reading/literacy .. what way up the book therefore the text goes, kids who look at signs. But this is so individual, so up to the individual and so much is in the attitude.

I am a reader and always wanted to. I was desperate to read at 4 but didn’t work out I could do that my self, just a little lackadaisical, and when we went to Australia (after a few terms at school in NZ) where there was no active teaching to read and as I thought at the time that’s what did it I made my mum ‘teach’ me. Where did I get the idea that I couldn’t do it myself?

I used to think that the Steiner thing where they actively believe that you shouldn’t read till 7 was just awful.. mainly the idea that I’d have been prevented doing something I so compulsively wanted but there is some point to this idea. Think of the success of Finnish schools that don’t start formal schooling till 7, the Brainwave trust stuff on brain development, Piaget etc, but are they just new boxes, lines to be drawn… what about the child who taught her self to read by 4? people like me or the kids I’ve met who were getting ready read at 7 and who were feeling the “I’m so stupid” because they felt alone in finding reading hard (which I suspect has scars deeper than the process and when they do learn to read they are still left feeling that they are stupid). I’ve also seen tortured adults desperately trying to do the right thing, what the teachers want, making their kid read the reader brought home even though it’s painfully obvious it’s not doing anything for their bond with their child. Why is reading thought to be anything to do with age? Children develop so differently.

How teaching reading works at school is; you give kids a simple ‘reader’ with some kind of pattern in it (e.g. one word difference in each page) and the child learns it off by heart, using the picture for the cue to the different word, there is usually some kind of twist on the last page so you don’t bore the kids into giving reading up? or so you can pretend it’s a real book? The child eventually pays attention to the text and learns the words “builds on their bank of sight words” and after the group reading session where you try to discuss the book while pretending it’s worthy of discussion (I’m not talking themes here because the books aren’t that interesting) then you give them worksheets on the book to labour some point the teacher adult wanted to make (a learning intention)- paste words in order, draw something relevant to the book etc. (I actually liked making worksheets, I like a puzzle, and occasionally have a pang of regret about my kid being allergic to worksheets..). The children take the book home and repeat.

Then there are the cards with the words cut out to hint at shape (for whole word learning)… the jolly phonics, with their other cues… the listening to the kids and coaching them with strategies (read on for clues.. go back to see if you’ve worked it out). Some useful ideas but the child still has to choose to do the ‘work’, if indeed any of these ideas are what works for them…

That’s what we think learning to read looks like right? Adult led.

It’s hard.. we all hear the stories of the 5 year old starting school not reading going through this process and not long after they read Harry Potter. Or they are lucky and get into reading recovery (if your school has this) should they be a slow?? starter, who by the way may grow up to be never without out a book for the train once the hard bit of getting past the “I’m just thick” barrier is done.

The books also matter. I nearly got put back a class when I was 6 because I told my awful teacher “I don’t know how to” when what I should have said was “re-read Janet and John are you having me on”. I still don’t often re-read and I HATE those books with a pattern like There was an old woman who swallowed a spider etc.

It is so individual.

I have no idea how people without my neuro-normal processes do it but they can, and I’d ask them how not their teacher.

This is how the process went with Helena and I admit to having MANY fears as despite recognising lots words at three she just stopped looking… it was the same with writing she just stopped and she’d seemed so “gifted”!!. But I waited for her. Years pass (YEARS), and she’s 6 and a half and I notice she’s looking again. All I do is get a few “readers” out of the library, mostly rejected by both of us, however she has learnt several of her picture books off by heart and “reads” them to herself. She’s also taken up writing again and in asking how to write some words we discuss a few sounds but in a very scatter-logical way. In her passion for famous five she starts reading the beginning of the chapters and it’s HARD… then somehow she’s started up the hump and is reading. She still says “I can’t read” though I think it’s the managing of her expectations, Famous Five is ambitious.

“I don’t really know” (when she realised she could read)

“I taught myself” (when asked if I taught her)

“Looking at easy to read books then trying a harder one, listening to mum reading then trying the same book” (What helped you learn to read)

“When I watched Imogen not play with me and read” (When and what made you want to read?) I’m not so sure about this answer as this was only a couple of weeks ago and she’d been putting in a bit of effort before this.

Today she read this book, she chose at the library, text unseen… probably level green? (at National standard? I forget these unimportant details)

I’m not sure she had thought of reading it in the car, just looked at the pictures… but sitting with me next to her for support she just did it.

(The book is a bit naff) 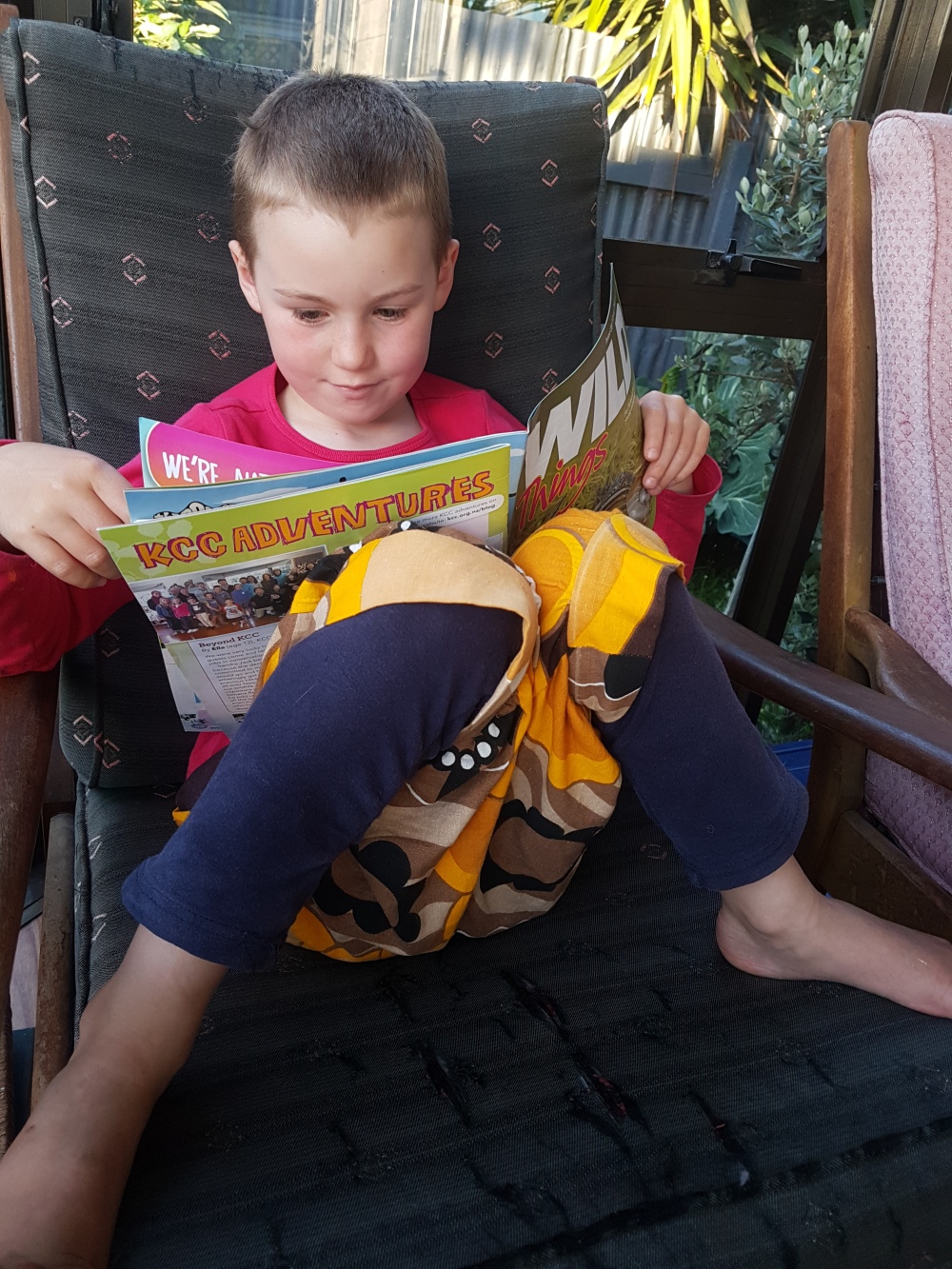 Then she read a picture book her 4 year old neighbor. “I can read you this one, I know it”

If I was to promote any strategy it would be “spray and walk away” – suggest ideas and leave it to the learner to choose what works for them as they have to do the work.