I have been having something of an existential crisis, again. I went to an art school years ago and have a zillion ideas. Recently I went to a gallery and it had an exhibition of the finalists in The Wallace award. I am arrogant enough (confident in my ideas and of my ability to execute them) to feel that my work could be there. I don’t have any competitive drive or desire to fulfill any ambition which is in part why my art isn’t there however the main reason is pragmatic. Knowing I’m not ambitious what’s the point? Where would I put all the crap that I made that didn’t make my standards? I don’t make stuff that sells (it ain’t pretty) and I would abhor making with that goal. All I see is a consumption of our planet’s resources in the making of such things that could be on someone’s wall/cabinet of curiosities until their guaranteed death when their poor kids have to deal with them – I ain’t Rembrandt. A momentary pleasure with a larger cost. I also think about selling art and how the maker is ripped off and how you can only sell to rich people (which contravenes my deeply held convictions), and who often collect as an investment, ick. My walls are covered in art – mostly sentimental, or crap my kid makes. We moved over a year ago and there was a cull of both of our art. She hasn’t forgotten or forgiven me for some. Today she revisited an old idea. I’ve already been told off several times for not keeping the original! 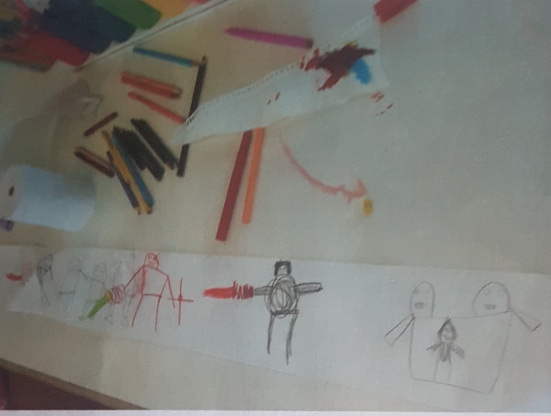 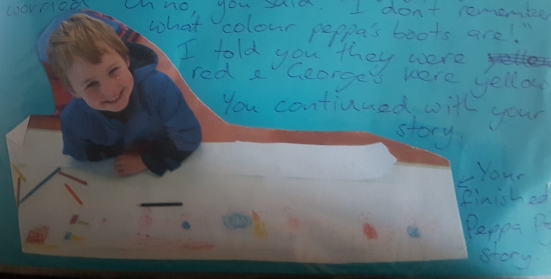 The movies have changed, from Star Wars (it was an ongoing topic of play not something she’d watched) to Animals United (which she has seen and used the packet to do detailed chatacter sketches), from Peppa Pig to Outnumbered. There is only characters this time, no plot.

Interestingly I remember making similar things with my sister. The most complicated being sellotape as film with little cardboard scenes and people between the layers. So time consuming and fiddly and the idea was to project the shadows by using a torch. It didn’t work. We did adds. Helena doesn’t see many – no TV.

Also today Helena made this snail carry around game… 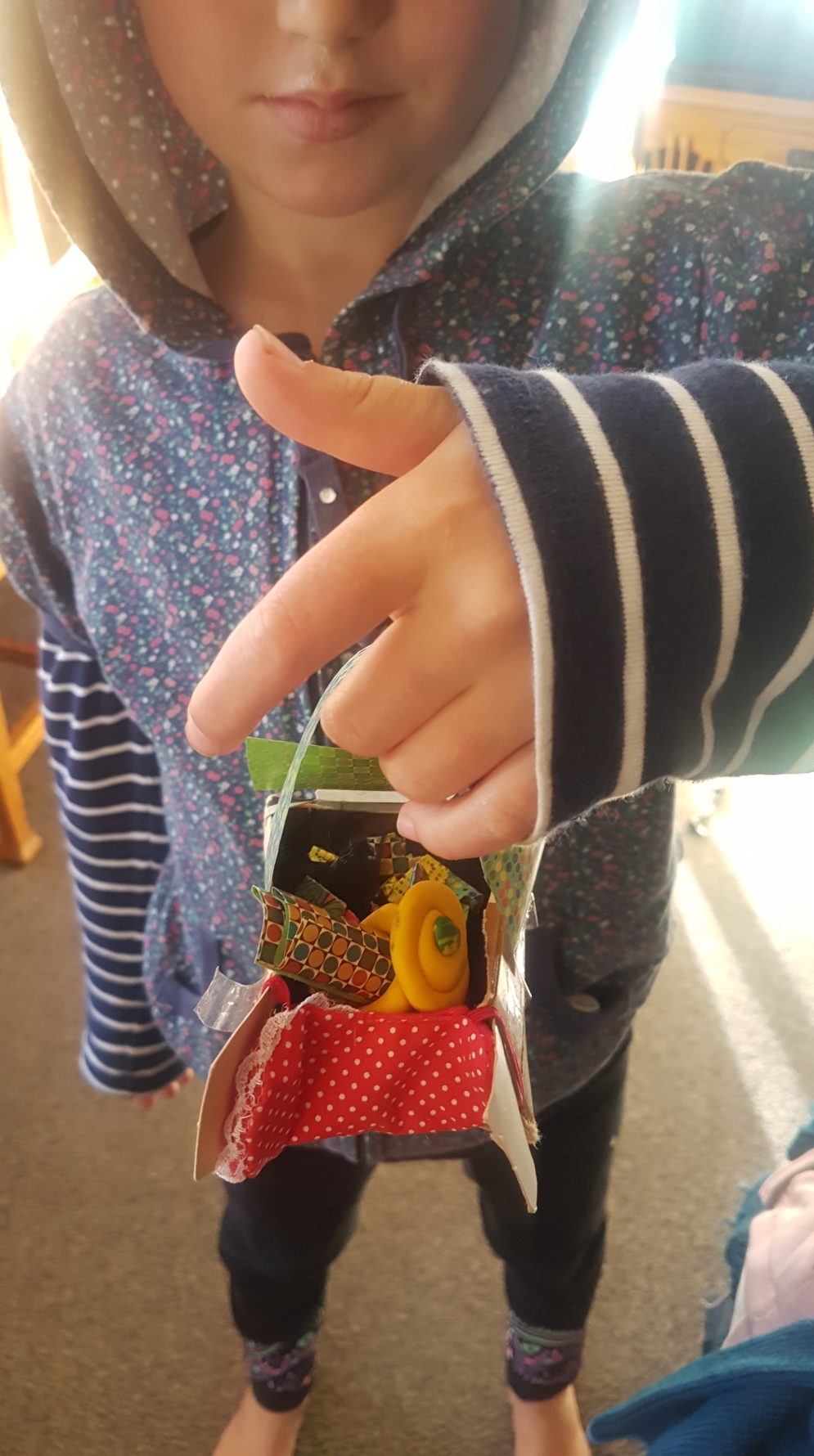 A basket where you take out the pink bit of paper unfold it to reveal the snails playground.

She didn’t glue the snails shell on as I said it was a better job for PVA than glue gun. How many times will she use it? What will we do with it later? If I disappear it (recycle) will she notice? Where do I put all her art? Will she have an existential crisis? Will I accidentally pass it on? Oh I hope not. I’ll just knit clothes while thinking of what sculptures I could be doing with crochet, I’ll quilt not plaster cast my new one boobie chest and make weird warmers… I won’t make a wall of glittery boobs for every occasion. I might just make plastic fossils – then I can rid myself of the plastic bag collection and people need bad just because presents that have no use and will out exist them. See. At least Helena uses paper….

This is a recent project – Helena did the head but hates the glue gun tear. Unfinished. Mostly compost able. 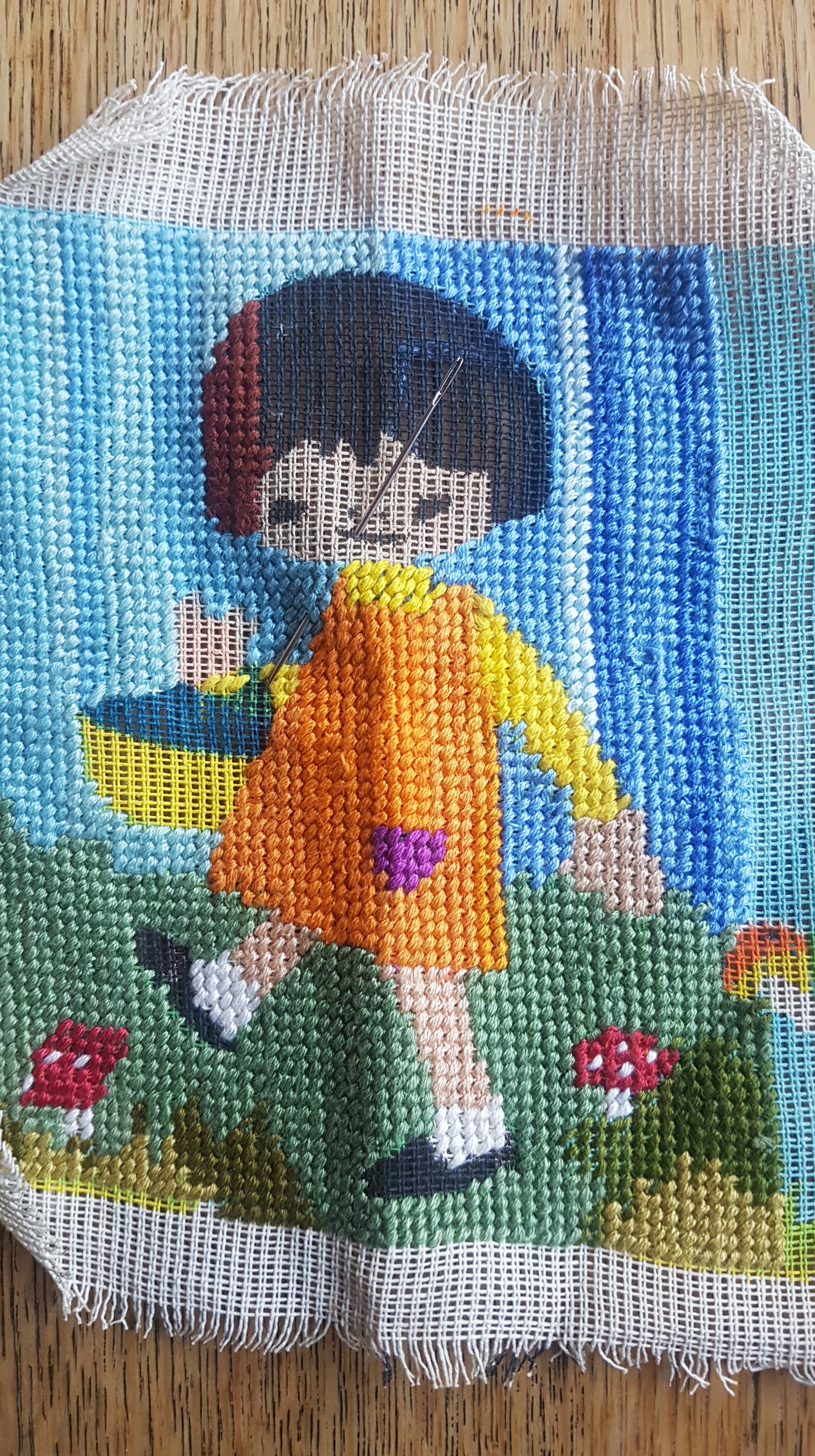 A Project I’m finishing that was started when I was a child. Helena says I am playing not working (as I am imagining bits outside the ‘instructions’). I could use it you see, a patch.