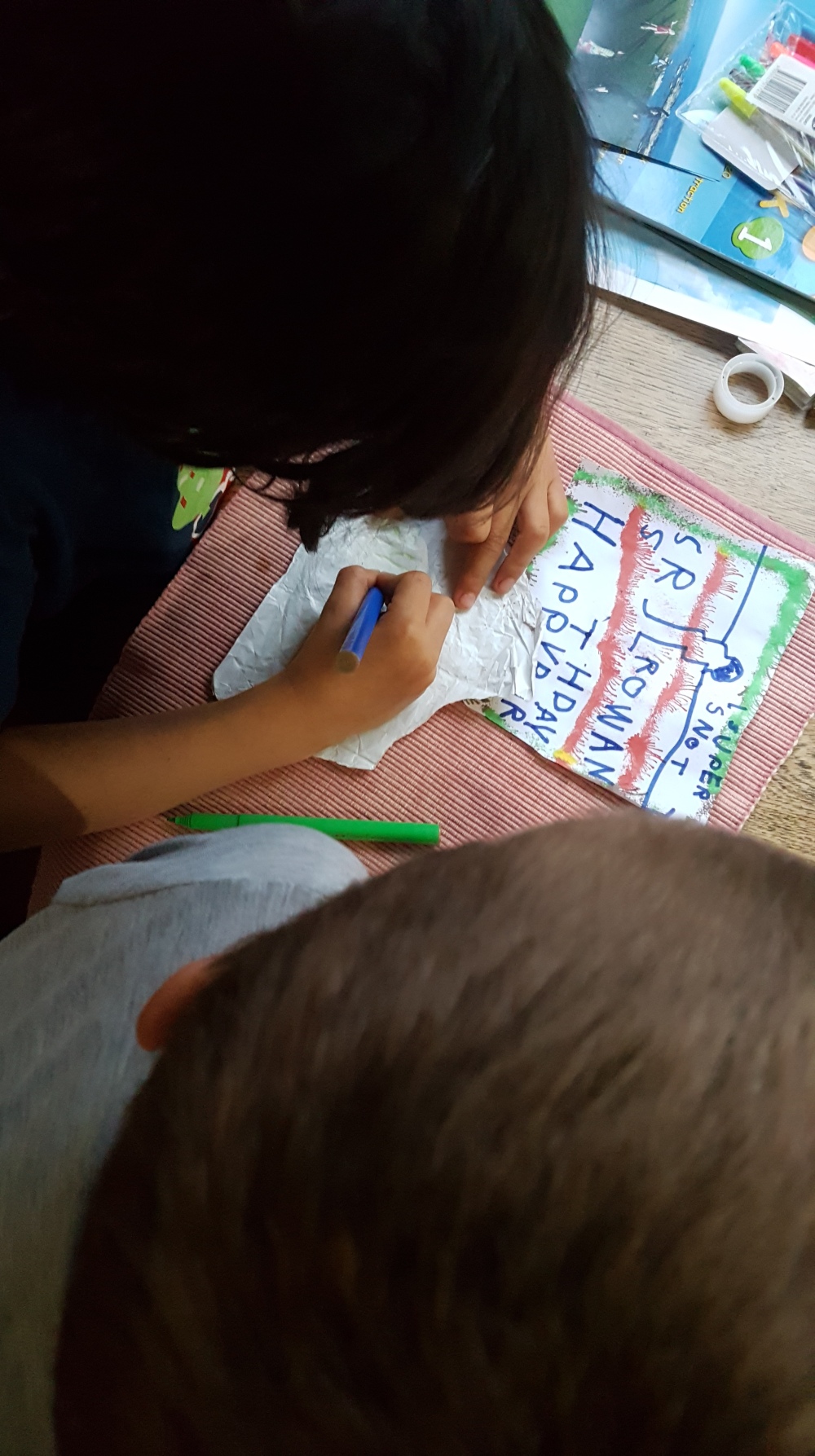 Helena had to, and wanted to, write a birthday card for her cousin. She had plans about the layout and getting to draw hearts but her friend was here…. fortunately for everybody her enthusiasm and joy about the task was enough to entice her friend (who is not a big drawer or writer) to the table where he sat copying her. When you are looking for words to write you can see many (in teacher talk ‘a print rich environment’) and some are goodies like Super Snot (a goop as revolting as it sounds). There they sat, her friend asking Helena occasionally to read him what he was writing. Then I gave them ginger beer, which was homemade (yeast vs whey experiment) and apparently it was so good that Helena’s friend wanted the recipe. So we have the perfect learning recipe:

This is how it might have gone if it was adult led… (making assumptions on my knowledge of this child).. “I know that” a common response to stuff that isn’t known and a way of shutting down someone telling you. “I’m not going to” as in I hate being told what to do so if you tell me to write I will run off and possibly throw things… where upon it becomes now an issue removed from the writing and towards the perhaps more familiar ground/rituals of behavior management.

This is how I feel the emotional content would pan out – I am feeling challenged by not knowing, needing to be told by someone in power, I reject you telling me how to, I want to be able to decide myself, I ‘hate’ that I don’t already know, it’s hard, I ‘hate’ you for this, I ‘hate’ me for this.. often comes out as “you’re not the boss of me, you can’t tell me what to do”. and in MY head it would be all swear words and fustration and trying so hard to remain in control of my self.

Helena’s friend is somewhat like her and sometimes I can so see why they like each other – speaking at times in the same language.

Now I’m thinking of ways to repeat this writing thing because the time is obviously right as the seeds of a desire to write and read are so there. So far I have: chalk on the driveway… duh experimental learning, learn from one’s experience, and get Helena to do it. Helena knows better than me what it’s like, how to do it, what’s important and lets face it he cares more for her ideas and opinions than my middle age ones.