Helena has this idea for a book she wants to write where the facing pages will be black with white writing and white with black writing. One side is reality and the other is life inside the mind – probably because she is always away with the fairies. This is my version. The stuff in italics is “school” talk.

First thing we did the morning rituals about what the plans were for the day, talked about timeliness, and being being prepared…

We ran for the bus with me saying are you warm enough, made it, but forgot a library card.

The children behaved like school children on a bus trip.

The children were loud and fidgety until I suggested maybe I should sit with them to keep them safe, make sure they didn’t give the driver a fright…

We had an exciting literacy lesson.

The children, 8 and 9, went to an under 5s story reading session. I was impressed with the guys reading. I’ve seen him at the library – seemingly quiet, timid even, but reading and singing to the kids he was so alive it actually sounded quite exciting (I was doing some secret reading of my own as they didn’t want me in the room). Helena even did the colouring in.

The children worked on their collaborative geometric project.

They were noisy and excited using two buckets of plastic things that fit together- probably designed for younger kids. They worked too close to a passageway and I learnt that I probably should have shown them the people working in little cubicles around the corner at the beginning of their project instead of at the end – I had to walk away so as not to get too cross, then when I showed them the people I could see they had been oblivious and wouldn’t have been as loud had they known. The two of them created a relatively complicated shape that took many hands, they communicated their ideas to each other quite well, built on each others ideas, well until they got sidetracked by finding each other hilarious due to the frequent use of the word poo. They produced very loud joyous shouts and dances after we had very quietly left the library building – heads turned, and people not as close to the children as me smiled benevolently.

We had a teachable moment and worked on our current years theme of waterways and plastic.

The kids found lots of bits of plastic, all the same shape (from Kathmandu coat hangers) outside, in the car park under a tree, near a drain! After the “I saw them first” and “I’ve got the most” moment was over and they realised their proximity to Kathmandu we marched in and they put them on the counter – I did the talking, I fell for the silence is getting a bit long thing and the adult was looking at me. The guy agreed it was appalling and said the manager was in and would be informed.

We had a healthy snack.

The children took for ever to choose a piece of fruit each at the fruit shop after I ruled out the Mango as being from too far away and after we discussed that $1.99 is actually really $2 as we don’t have 1c pieces.

We conducted a statistical survey, continuing on from our survey from last week.

Kids shouted “black” and “not black” (we are talking clothes here) loudly at the back of the bus while I tried to keep up. Conclusive results: there were more black tops than tops of ANY other colour, and way more black bottoms… it isn’t a totally non biased result as they had the theory that black would win and tended to under report non black items of clothing. Then they both wanted to be the one to push the buzzer… the bus driver thanked us when we got off, possibly for getting off. Last weeks bus survey was a bingo board and even louder with the bus driver pointing out the Caravanning Club logo they were looking for. That bus driver gave us ticks in the ‘wearing a hat’ box, the ‘has a beard’ box and the most popular box of ‘glasses wearing’. 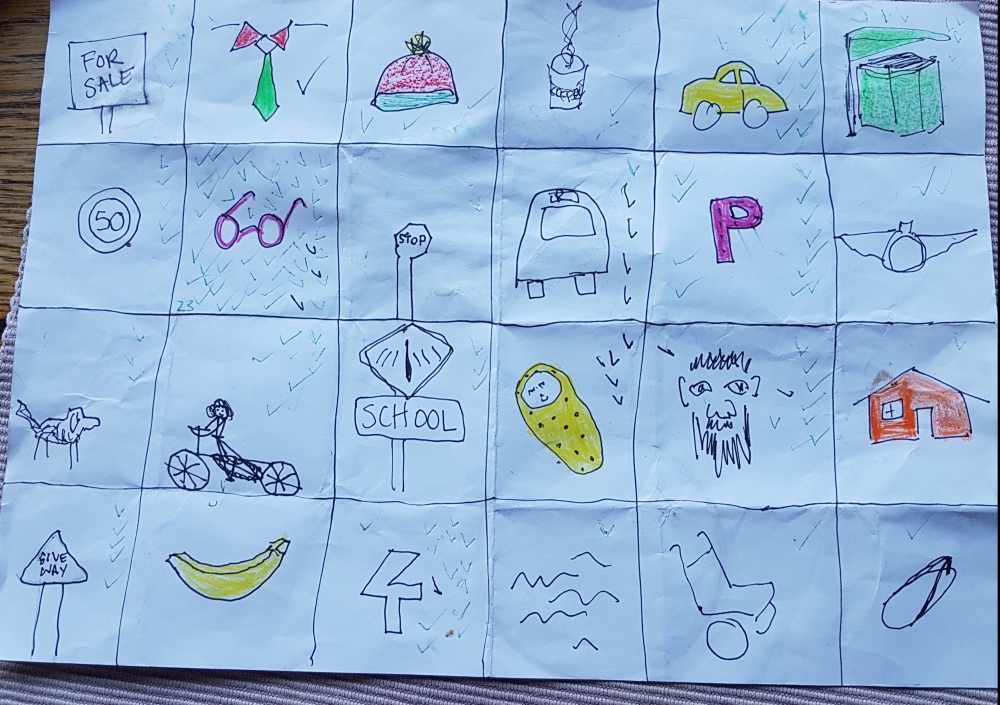 Children were not sitting to eat their lunch boxes for 10 minutes and the duty teacher didn’t check their lunchboxes.

They ate while making stuff at an outside table, unless the neighbors dog got the food, I was making coffee and having a wee sit with a nakama (friend who is like family).

We had a big buddy session where the older children helped the younger kids followed by PE. 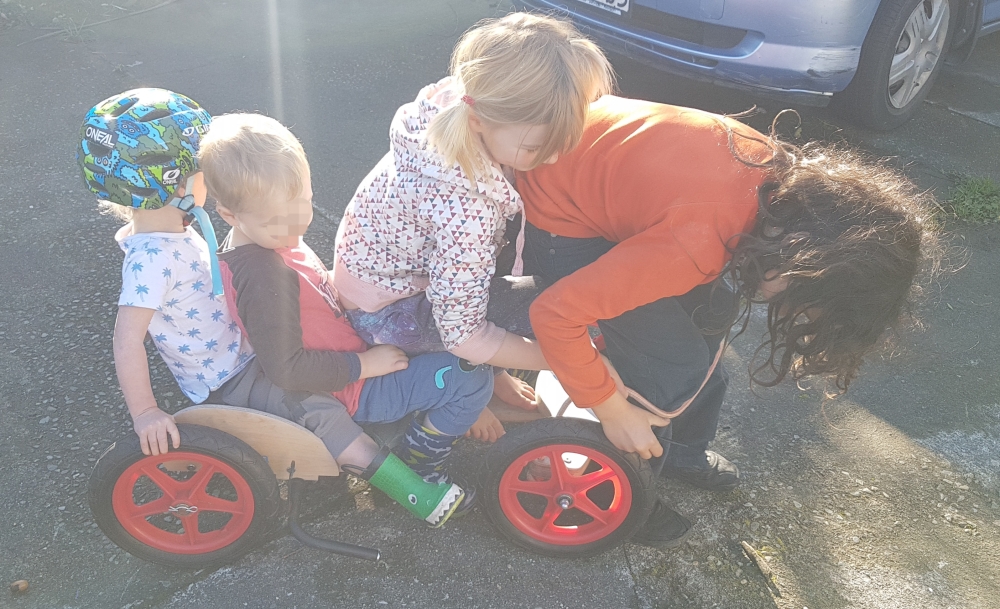 Younger kids were both 2, or are they 3. And budding is generous and yet understates what they did. Helena’s friend got off the go cart to let one of the little ones have a go, he must have felt the awe and desire emanating from the little one as he then pulled him round. It was beautiful. Then they all got on the one go cart…..

There were a few debates about turns, ownership etc, some folded arms and tears (Helena did decide that she was perhaps hungry and should have had more lunch)… only the big kids, the little kids were happy as.

We had a science lesson on non newtonian fluids, and animal features at the same time as having a literacy session on argumentive language. Packing in our curriculum coverage.

The kids played with goop and argued about me giving some of Helena’s to her friend when he’d so obviously “wasted” his by letting it slip through his hands.. at the same time as listening to a pod cast called Smash Boom Best, snakes vs spiders was particularly contentious but jam packed with facts I needed to be told despite listening to it with them.. I guess they were good facts.

Then the cleaner came… I wish.