Helena doesn’t like to write… not even ‘Happy Birthday’ and I don’t make her, well except her name in cards so people know who it’s from. Why would I make her?- to guarantee she hated it? Imagining even trying to make her is making me smile. It’s just not possible. There are several issues at play – her perfectionism with letter formation, spelling etc, how long it takes, her extensive vocab compared to what she feels she can attempt to write. I’m not allowed to comment on how good her writing is or isn’t because I don’t have the same undefinable standards so I keep getting my comments “wrong” – I think we need to work on the quilting concept of ‘fit for purpose’. However the other night I discovered a condition under which she will write… insomnia, getting to stay up late. At the moment she is once again not sleeping. We’ve tried meditation, relaxation techniques, and there is no point in her listening to stories as she stays awake until the very end, even wholesome boring books. The last few nights it’s been well after 11. I’m exhausted. Her insomnia is in part caused by her strong desire not to sleep, so strong is that desire that she will voluntarily write so she gets to stay up. 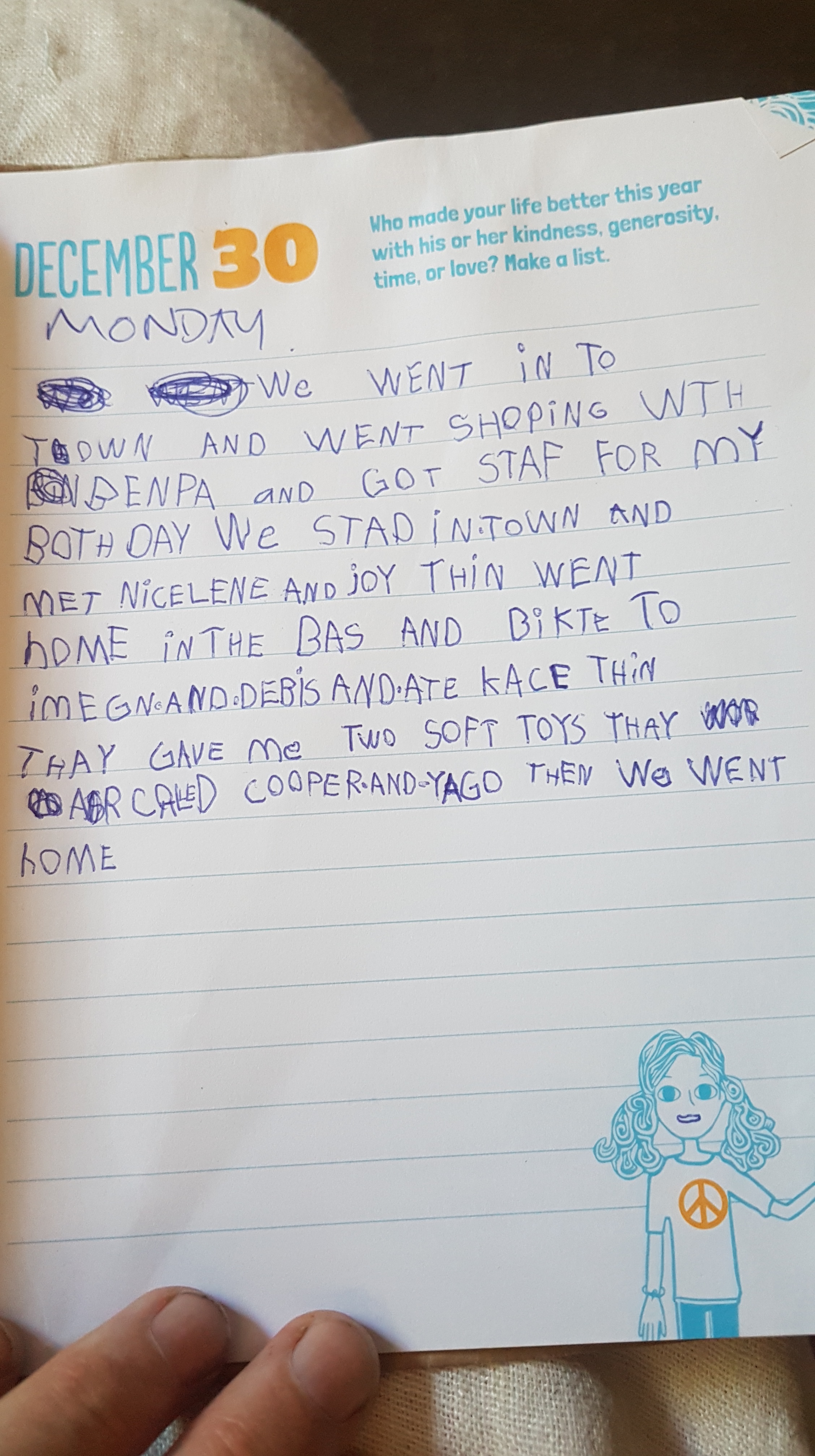 And below another example from earlier this year… (and another period of insomnia where we were trying stickers, her plan, and it worked that time).

These are pieces of evidence. Actual scientific evidence of her writing (mechanics rather than writing as an art). What is evident about her writing? This is especially interesting to me as I’m  reading a book on dyslexia and I just re-listened to an academic talking about reading and linguistics.

In the March one there were 7 missing consonants (2 from blends) 4 wrong vowels and 21 missing vowels. In the December one only 5 missing/wrong consonants, 4 wrong vowels and 7 missing vowels. By December she had stopped always putting a dot between words and even used 1 little letter. She is obviously getting better….. and without practice! She does not practice. We do discuss spelling on the few occasions she asks me how to spell something, and we talk about the absurdity of the English language and it’s borrowings often when she offers to read aloud to me (I love being read to). The missing vowel thing is so common with early writing that I’ve always assumed it’s developmental, must look that up. Her spelling is so normal and progressing so normally that I can only assume the practicing thing is unnecessary, but sample size of one. Is it just development time? I am questioning the whole writing words lots of times, practice, practice practice convention. Hmmm.. I’ll think up some experiments to inact on my sample size of 1.

I won’t make her write but I will use what I have to inform me in any way I can help her.