Chemistry is the properties of material and involves measuring stuff, adding things together watching (and some waiting) for reactions. Not if you are 7 and given free range to experiment. It’s adding everything and feeling it, the texture, colour, trying to get your mixture the same as your co-worker. It uses language like, ‘I added a little of that then some of that’, ‘don’t add it all then there will be none left’, uses technical terms like ‘gloupy’, ‘squishy’, ‘sticky’. There is no waiting. I’m in my corner carefully sprinkling guar gum and stirring (I don’t want lumps) waiting to quantify changes before adding more. Then I’m carefully adding borax and water slowly, stirring and waiting. I get perfect goop, your classic slime. They had so much more fun, and were interested for a longer period than me, I stopped when I had my product. Their goops are sticky, well fondled, and according to them perfect. They are different colours – we used red cabbage water. Everytime they got a fizz or colour change it was as if they’d never seen such a thing before. I know Helena knows the names of our secret powders, I know she knows how to make a fizzing potion and how to get the cabbage water to go pink but that just isn’t it for them, she lets it all go. For them it’s a whole body, enthusiastic free for all.

I collected the left over goop and was about to wash the jar (a few days later) but gave it to Helena first who investigated it for longer than it took to write this. 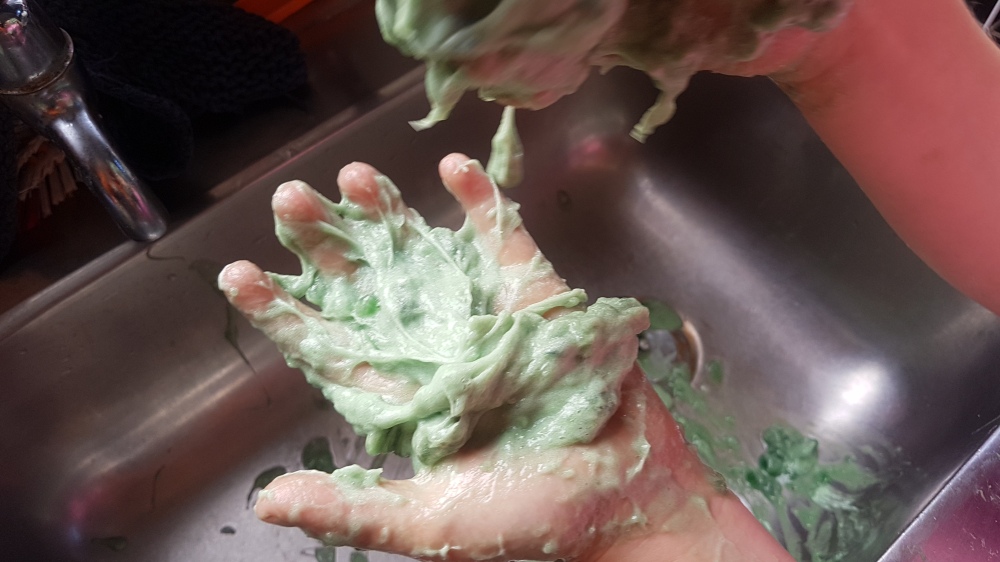 It’s still fun. She “baked a cake” found it irritated her eczema.. she’s asking to get into the sink with it. I say no due to mess. “I have webbed fingers”.

So they aren’t learning the technical terms of acidic, basic, viscosity, hydrophyllic, they aren’t talking about the carbon dioxide being released, neither are they talking about polymer chains. They are measuring of sorts, they are observing and they are having a good time. I am sure if they want to know they’ll ask or Helena can read the words in the slime book we got out from the library. It has to be their thing first or it will never be theirs. Helena is asking if we could make exactly the same goop again so here starts the first part of measuring and writing down the recipes -the recognition of it’s importance. Our friend Sheena would laugh, she kept notes on her wine making whereas I’m a chuck-er-in-er.

I wonder what would happen if we microwaved the potion?